I crave phở like I crave sushi. Not often but every once in a while I just need some strong flavourful broth. I’ve had bad phở and I’ve had awesome phở and for me, it’s usually about the broth. Sometimes it’s too sweet, sometimes too fish-saucey and others give me the perfect balance of flavor depth. I don’t get very brave with tripe and what-not and stick to what I know with thin-sliced raw beef or chicken. The last restaurant bought phở I had was not very impressive. The beef slices were all stuck together in one big clump, hard to pull apart and mushy. Blech! It’s a good thing it’s cheap or I’d have a hard time spending money on it. Phở is one of those dishes that people don’t typically make at home because it’s ‘a labor of love’ and thus I had never even considered attempting it. So, naturally, I was a bit floored when I saw this recipe on Smitten Kitchen. It’s actually quite simple, doesn’t have a million, complicated and inaccessible ingredients. The ingredients that you do need are super inexpensive and aside from the chicken I think I spent a total of $4 on this meal. It is time consuming though. All in all, it takes probably 3.5 hours to make but there certainly isn’t a lot of effort involved. Just a lot of simmering. I would consider this a perfect recipe for new and practicing cooks and the results are more than worth the time! I actually got so darn excited making it that I forgot to add basil and lime!

METHOD
-Preheat oven to 400°F, quarter onion with root and skin on. Slice and smash fresh ginger. Quarter fresh chicken.
-In oven proof dish, roast onion and ginger for 25-30 minutes until charred on top. Turn oven off, remove onions and set aside.
-In large stockpot, bring 4L of cold water to a boil. Add chicken bones or wings, fresh quartered chicken, salt, sugar, roasted onion, ginger and spices of choice. I used cinnamon and fennel seeds. I also had to split my water and chicken into different stock pots because neither of mine were quite big enough. More dishes for Mike!
-Simmer chicken for 30 minutes or until cooked. Remove chicken pieces from pot and remove meat to a small plate or bowl and refrigerate.
-Return bones and skin to stockpot and simmer for 2 hours. Strain broth from bones and onions, add fish sauce and salt to taste and simmer for another 15 minutes until broth is reduced. Discard bones and onions.
-Prepare rice noodles to package directions.
-Split the broth between 6 serving bowls. Add noodles, reserved chicken and garnishes/sauces of choice. I love lots of bean sprouts, hoisin and sriracha but this broth would be just fine on its own. 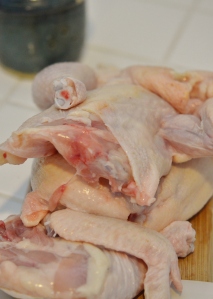 NOTES
-I bought two 3lb roasting chickens and made one in the slow cooker the day before for pulled chicken tacos. I reserved the bones and skin for this purpose but you can buy a couple pounds of fresh chicken wings and one roasting chicken instead. If you want a lot of meat in your phở then use two whole roasting chickens. You have plenty of options with this recipe, whatever works best for you and your timeline.
-The broth can be made in the morning and heated up for dinner or even made the day before. It’s a time-consuming recipe so split your time how you need to.
-Try to use fresh spices if you can! A fresh stick of cinnamon, a few star anise or cardamom pods would lend a lot of delicious flavor to the broth.
-Some of the nutritional info will depend on what garnishes and especially sauces you use, so I’ve omitted them and provided nutritional info strictly for the broth with chicken and noodles.